As you may know, NaNoWriMo, or National Novel Writing Month, takes place in November each year. All over the world people try to write 1667 words a day, every day, with the aim of having a 50,000 word draft by the end of the month. The event, which has been running for more than a decade, now attracts more than 200,000 participants each year.

I tend to be a very slow writer – my first two novels each took around four years to write, so the idea of getting a sizeable portion of a novel down in a month was very appealing to me. I was thinking seriously about committing to NaNo in 2012 but when my novel, Whisky Charlie Foxtrot, was scheduled for release on November 1st, I thought my energies would be better spent on promotion in that month instead. Still, the idea of NaNo haunted me.

I decided to apply the principals of NaNo to a single week. I arranged to stay with a friend who has a writer’s studio on his beautiful property in Cowaramup, in WA’s south-west. Free from the normal round of domestic duties and parenting, with a self-imposed ban on social media, I set myself the goal of writing 10,000 words in 5 days. I called it PeNoWriWe (Personal Novel Writing Week).

I wrote for the first time using Scrivener, a software program designed specifically for writers. One of its features is that it allows you to set a target for each writing session. As I came closer to my target each day, a bar in a little pop-up box in the corner of my screen went from red to amber to green. 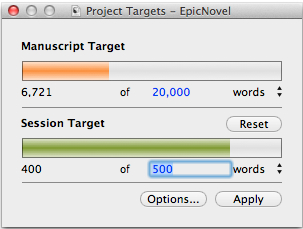 Having a visual representation of my progress towards my target was much more motivating than simply seeing the word count go up and it kept me sitting at my desk after I normally would have given up. (I was a little disappointed that nothing happened when I hit the target – I wanted a little animated dude to come out and play a trumpet fanfare or something; maybe they can consider that for the next version).

the view from my desk

I learnt some interesting things about myself during PeNoWriWe. One is that it takes me a while to get rolling. Most mornings I wrote only 500 words, whereas in the afternoons I wrote three times that much. The other thing I learnt is that when I really push myself, and, if I can eliminate all distractions, I am capable of writing 2000 words a day.  Yes! I hit my target and wrote the entire first chapter of my new novel Ciudad.

Your turn: Have you ever taken part in NaNoWriMo or something similar? Or have you ever squirreled yourself away to get a creative project off the ground? Are you motivated by little glowing bars in a pop-up window? Or does it take something more to keep your nose to the grindstone? I’d love to hear from you in the comments.

Remembering How to Write or Bookish Goals for 2013